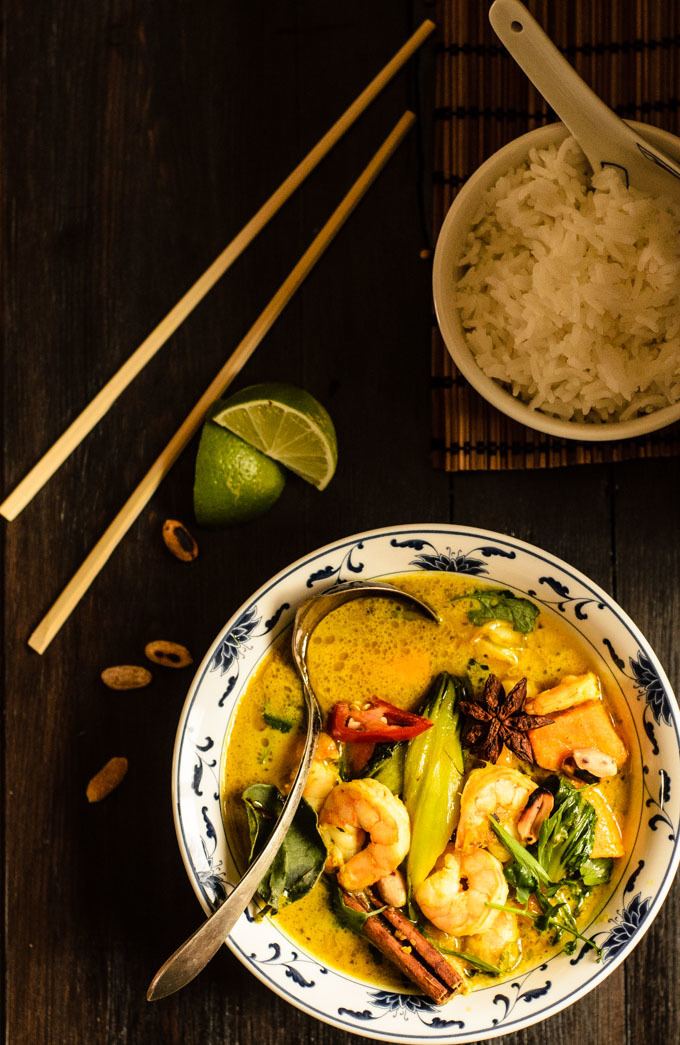 Out of all the curries on the planet the massaman is definitely a favourite. I’ll order in the odd Indian from time to time and enjoy a biryani, a masala, or a jalfrezi now and again. If I’m doing a curry at home though, i’ll nearly always opt for a mild and creamy Thai massaman.

The massaman curry is quite unique. It gives you the best of both worlds, both Indian and Thai. It’s an infusion of all those pungent flavours you associate with south-east asia. Coconut, lime, garlic, chilli, ginger, and lemongrass, plus a list of Indian spices that ordinarily would have no business in a Thai curry. Cumin, cardamom, cinnamon, star anise, nutmeg, and turmeric all feature in the curry paste used to make a massaman. 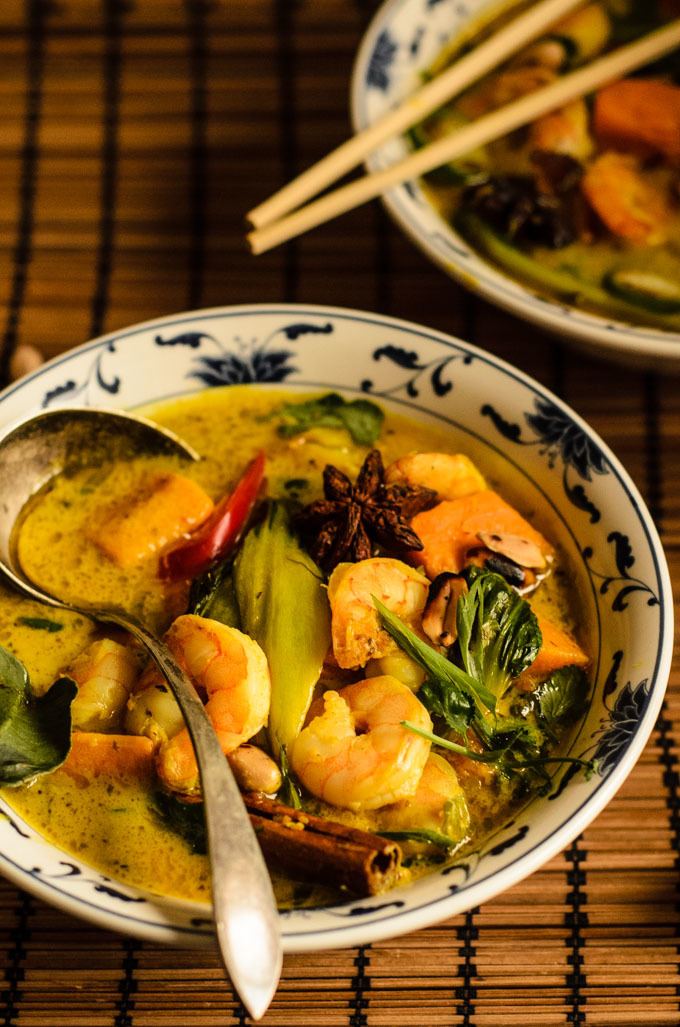 There’s a couple of theories on the origins of the massaman and how these fragrant Indian spices ever ended up it a Thai curry in the first place. Some say that the dish came from southern Thailand where the food is a bit more influenced by Malay and Indian cuisine. However according to one of my favourite chefs and renowned Thai food guru David Thompson the dish originated in the royal Thai court in the 17th century, brought over by Persian merchants.

What ever its origins the cook who first put it together was ingenious. Blending such a long list of different herbs and spices was either a lucky accident or took a lot of thought and skill.

It’s also the reason that the ingredients list for this curry recipe is so long. However don’t be put off. If you can pick up a massaman curry paste at your nearest Asian market you’ll cut the list in half and save yourself a ton of work. 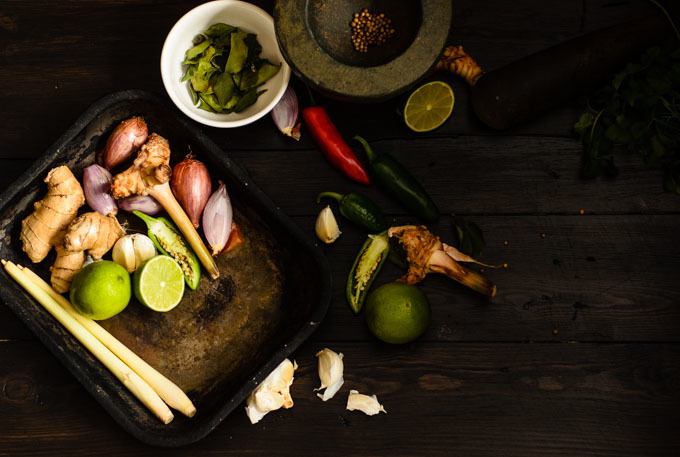 I suppose you could call this cheating and I used to think that in order to cook authentic Thai food than you had to make your own paste. I had a romantic idea that the Thais sat around all day peeling garlic, ginger, and shallots than pounding the crap out of them in a mortar and pestle. Having visited the country a couple of times I now know the Thais get their curry paste in the same place we do, down at tesco.

There’s absolutely nothing wrong with this. A store-bought curry paste is nearly as good as any you could make at home. The only real downside is that you have no control over how many chillies go in there and how fiery it is. There’s some very tasty red and green curry pastes you can get at the big chain supermarkets. My take on store-bought ingredients is that if I can’t make better myself than I’ll save the time. 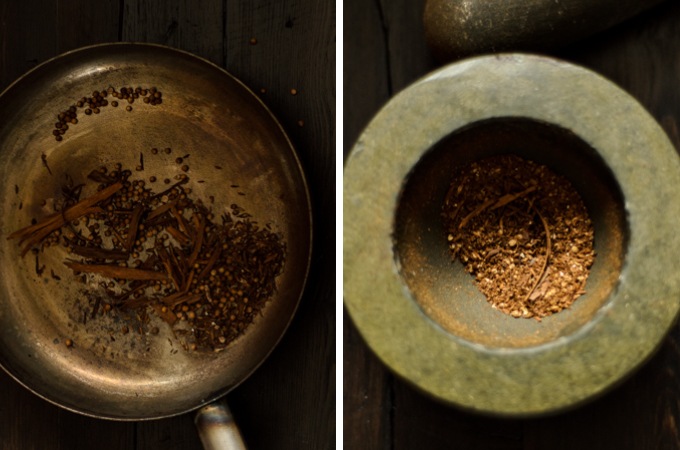 Unfortunately for me massaman curry paste isn’t as common as red and green. The only place to pick it up is the asian markets in Dublin city centre, and you couldn’t pay me to go in there on a saturday a couple of weeks before christmas.

This meant making my own paste and a little extra peeling, slicing, and chopping. Most of the heavy lifting can be done by your food processor. Purists might say that a curry paste should only be made with a mortar and pestle and maybe their right.

However here in the west most people’s kitchens are only equipped with the small version, one you can use to grind up spices and to make curry paste you’ll need something a whole lot bigger. In Thailand they have these really large ones with a pestle about have the size of a baseball bat. It’s the food processor of the traditional Thai kitchen and they use it regularly for jobs such as curry paste and to make their famous papaya salad. 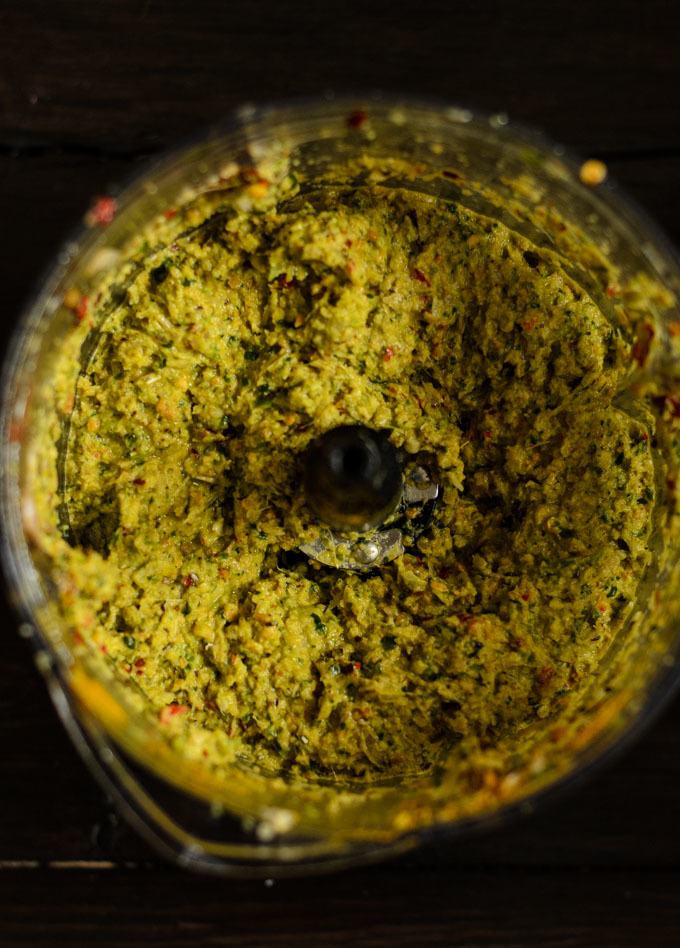 The massaman is also one of the few curry recipes to feature the humble spud. Maybe it’s because I’m Irish but I think putting potatoes in a curry is a great idea. Most massaman curry recipes just use regular potatoes, but here I used the brightly orange coloured sweet potato. It gives a little balance to the massaman which can be quite sour. it’s this use of potatoes along with coconut, peanuts, and dried spices that keep a massaman mild and mellow despite the use of quite a bit of hot chilli.

One of the things to envy about Asian food is the amount of ingredients that you can use to season food. With traditional western cuisine if we want to season something we really only have salt and pepper. With Asian food you could use soy or fish sauce. If we want to add a little sourness to a dish there’s just vinegar. Out in the east you’ve a lot more choice, lemon grass, tamarind, lemon, lime zest, juice, and leaves can all be used to spice it up. 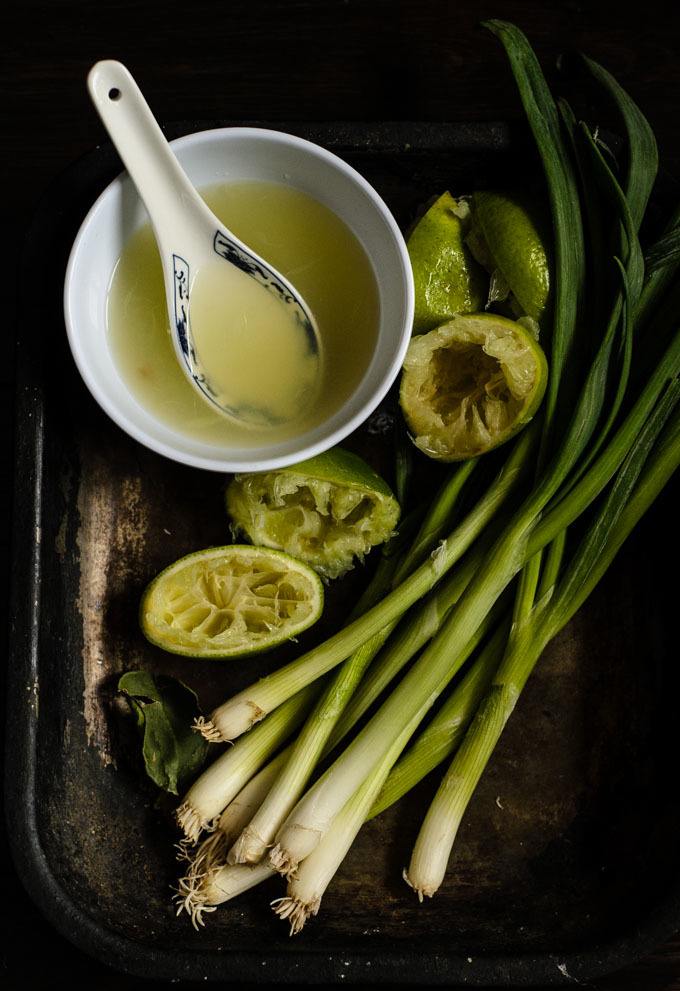 This is just something to bear in mind when you’re making any Thai curry. The quantities of these ingredients aren’t set in stone. Thier more of a guideline, add a little more or less till you have the curry just the way you like it.

Maybe it’s because of its muslim roots but traditionally a massaman curry is made with chicken not pork. I’ve seen a lot of recipes around for it using beef. Something they’d never do in buddhist Thailand where the cow is revered as a working animal. You don’t see all that many recipes for it with seafood but crustaceans like prawns, shrimp, and crab work really well with Thai spices. 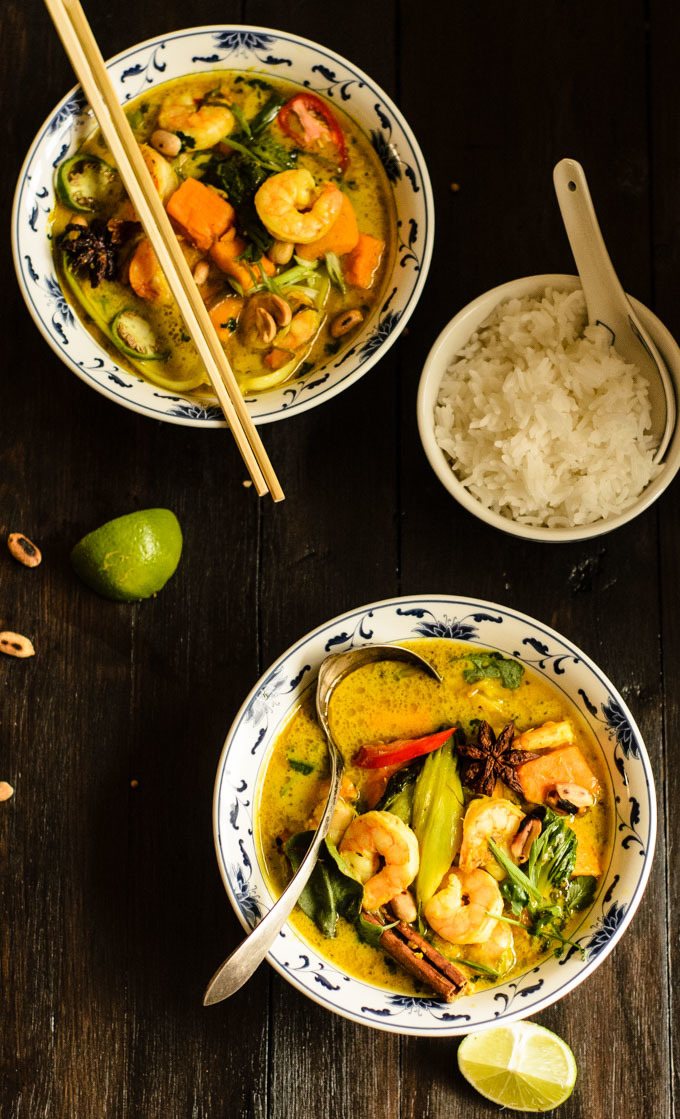 It’s also a great recipe for vegans or vegetarians just leave out the fish, meat, and stock. Then add any veggies you like. If you use a good curry paste and coconut milk you can’t go far wrong.

What will you put in your massaman?

The quantities given here for the curry paste make about a cup. You’ll only need 2 tablespoons to make the curry. The rest will keep in the fridge for about a week. Alternatively divide it up into smaller batches and pop it in the freezer.

For the massaman curry paste

For the massaman curry

To make the curry paste

To make the curry

Shrimp Head Stock – Plus 5 Delicious Reasons To Save Those Shells.

The Sustainable Fish Pie Recipe (5 Guilt-Free Species To Use)